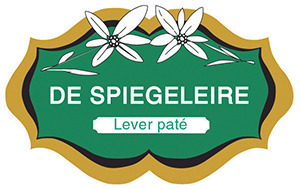 Retailers always impose higher quality requirements on suppliers of freshly packed products. When packaging food – often under modified atmospheric conditions, leaking or open packaging must be prevented to ensure preservation and food safety. That is why De Spiegeleire NV, a Belgian producer of quality pâtés, implemented the SealScope™ seal inspection system to automatically check their pâté in consumer packaging.

Founded in 1972, De Spiegeleire produces fresh, artisanal pâté preparations for butchers, catering and retail customers. As a second generation family run business, David De Spiegeleire took over from his father in 2003. The company has grown into one of the most important pâté producers in Belgium. Initially De Spiegeleire produced pâté blocks, but since 1999, slices of pâtés have also been available in a horizontal flow pack. The pâté in this consumer packaging is prepared in many variants and is sold to large European retail customers. 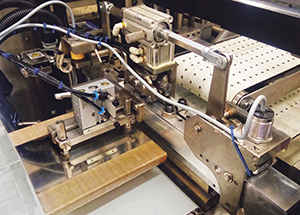 As an international player, De Spiegeleire considers quality of paramount importance, resulting in a large number of quality certifications, such as the IFS certificate (International Food Standard) and the BRC certificate (British Retail Consortium), which represent the most sophisticated food standards in Europe. But the increasingly stringent requirements of customers, who are striving for a zero tolerance of defective packaging, also drive De Spiegeleire to continuously improve their quality procedures. That is why De Spiegeleire recently invested in a 100% seal inspection system for their flow-pack packaging line to eliminate open or leaking packages. 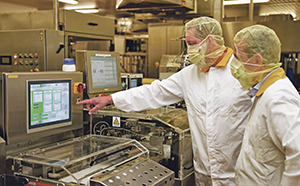 The consumer pâtés are individually packed in a resealable flow-pack under modified atmospheric conditions. This allows the products to have a longer shelf life while still preserving freshness. Leaks in the seal are very detrimental because the product is then exposed to the air which causes visually unappealing discolouration and faster spoiling. These leaks are typically caused by product or material in the seal – such as a piece of pâté or the plastic tray – or by folded packaging film. Since millions of units are produced every year, a full manual inspection is impossible and too costly. As there is still a risk that manual sample tests can deliver defective packaging, De Spiegeleire investigated a solution that automatically inspects 100% of the packaging produced. 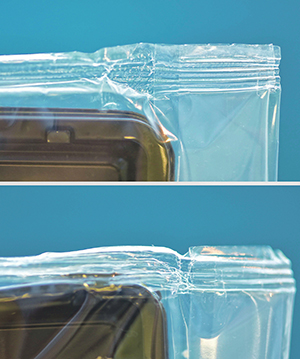 Omori Europe, the packaging machine supplier and a partner of Engilico, recommended De Spiegeleire to evaluate the SealScope™ seal inspection system. After checking with other references, they were confident it was a technology they needed to adopt. This flexible packaging inspection system is based on sensors mounted on the sealing bars of the packaging machine, measuring the distance or vibration when closing the sealing bars. The measured signal is compared with a reference measurement signal of good seals. Folds or product in the seal are thus detected and further ejected from the conveyor. Because the sensors are directly integrated into the packaging machine, there is no extra floor space required and no need for special adjustments to be made to the production line. Another advantage of the non-destructive seal inspection is that if the product in the rejected packages is still intact, it can be repackaged, which leads to less overall waste. 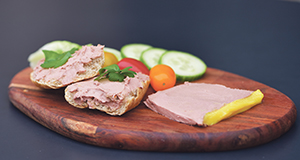 “The choice of SealScope™ is perfectly in line with our quality policy,” says David De Spiegeleire, managing director, “Our pâté itself is authentic, but our machinery is modern and our production process is fully tailored to our customers’ high quality requirements.”

The SealScope™ system is complementary to the extensive quality controls and systems that De Spiegeleire has in place, such as weight control, metal detection and gas and sample analysis. Also the supplier of the packaging line is very impressed. He reports that to their customers, De Spiegeleire is the production site with the most advanced quality control systems. 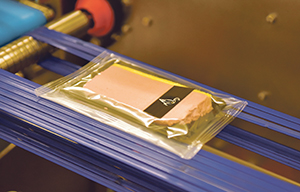 De Spiegeleire is very satisfied with the installation and operation of the Engilico system. The system accurately tracks production data per variety, such as the number of good and rejected packages. Because every package is measured, one can also observe trends in the production process. This also allows timely maintenance or fine-tuning of the packaging machine, which can prevent sudden production stops or manufacture of defective packages.

“100% seal inspection of packaging is necessary to meet our customers’ quality requirements,” Jeroen De Spiegeleire from the technical service department continues. “It gives us a high level of confidence that each product is inspected individually.”

Due to the increasing demand for pâté in consumer packaging and recent expansion of their customer base, De Spiegeleire has increased both their production and inspection capacity.