The Glen Grant distillery has recently announced the UK launch of its newest expression, an elegant 15-Year-Old Single Malt Scotch whisky that offers an intensified expression of The Glen Grant’s signature style.

Master Distiller Dennis Malcolm, who this year has celebrated 60 years in the industry earning him the title of longest-serving distiller in Scotland, crafted this 15-year-old single malt Scotch whisky at 50% ABV ‘Batch Strength’. Matured in hand-selected, first-fill ex-bourbon casks, the whisky’s impactful flavour is further enhanced by non-chill filtration for a fuller texture. The result is a golden barley-coloured liquid, offering delicate floral, fresh citrus, apple and honeydew melon aromas that give way to soft caramel and oakiness. The aroma is accompanied by a rich honey palate with hints of spiced pear, apricot marmalade and vanilla, followed by a maltiness and slight spice that leaves a nutty finish with delicate notes of fruit.

The Glen Grant 15 Year Old expression already has several industry accolades under its belt, including a Double Gold medal at the 2021 ​​San Francisco World Spirits Competition, 92 points from the Whisky Advocate in 2021, a Gold Medal at the 2020 New York International Spirits Competition, and winning the 2019 Spirit of Speyside Whisky Award for the 13-20 Years Category.

This release comes at an exciting time for The Glen Grant, with a new packaging design revealed earlier this year, and the upcoming launch of the exclusive and rare 60 Year-Old anniversary expression. The unveiling of the new packaging in the UK marked a global relaunch for The Glen Grant. Recognising the brand’s move into the premium Scotch whisky category, the relaunch celebrates The Glen Grant’s exquisite range through a reimagined packaging design. Paying homage to its provenance in Speyside, the captivating new gift box and label highlights the brand’s storied history and pays tribute to the ingenious Major James Grant. 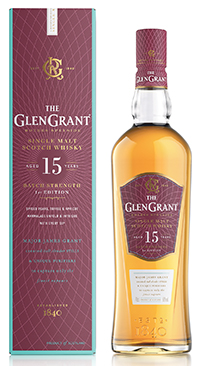 The most prominent change is the addition of a unique geometric pattern in the centre found on the label, the capsule and outer carton. The vapour pattern represents part of the distillation process capturing only the purest vapours, which helps create The Glen Grant’s esteemed elegant style. This pattern is a reference to geometric patterns found in nature, which illustrates the interplay between the strength and beauty of nature and ingenious engineering to create a truly refined spirit. This natural and timeless Modern Victorian look delivers the same character and premium quality that is found in the liquid.

The Glen Grant hails from Rothes in Scotland’s premier whisky producing region, Speyside. Originally founded by brothers John and James Grant in 1840, the distillery was inherited in 1872 by John’s nephew, James “The Major” Grant. “The Major” was a legendary inventor, socialiser and traveller – a unique and charming man of great curiosity and imagination. The Major’s obsession with the details of Victorian engineering and his passionate love for nature led to the creation of the unique distillation process that sets The Glen Grant apart from other single malts. The liquid is distilled using tall, slender stills and revolutionary water coolers or ‘purifiers’, designed to capture only the finest vapours. The curiosity and ingenuity of its founders is reflected in the complex flavours of the liquid – crafted to an elegant light golden colour with a fruity and nutty taste.

Employing the same techniques still used to this day, the whisky is overseen by Master Distiller Dennis Malcolm, Scotland’s longest-serving distiller who was honoured with an OBE in 2016 for his services to business and the Speyside community. Nobody knows The Glen Grant more intimately than Dennis. Dennis was born on the Glen Grant distillery grounds in 1946 and first started working at The Glen Grant in 1961 as an apprentice. His passion and unrivalled knowledge of the process means that the liquid is crafted to perfection, with the same consistent dedication, passion and care as its original visionaries. Having started his career as a barrel maker at the age of just 15 years old, Dennis has dedicated his life to maintaining the quality and integrity of Glen Grant Single Malt Scotch Whisky. In his current role he manages and directs Glen Grant for Campari Group, governing the consistent quality of the whisky.

The Glen Grant range includes several offerings each with their own distinct flavour and aroma – a refined 10 Year Old, 12 Year Old, 18 Year Old and a selection of limited releases. Master Distiller Dennis Malcolm says of the 15 Year Old expression, “If the expressions were my children, I would have to say The Glen Grant 15 Year Old is my favourite.”

The 15 Year Old expression will be available to purchase exclusively from The Whisky Exchange online from 10th August, and in selected retailers.