An exceptional personality encapsulated in a legendary cuvée

The prestigious Charles Heidsieck House, one of Champagne’s most admired producers, announced the newest edition of Champagne Charlie, a historic cuvée released to celebrate the bicentennial of the phenomenal founder, Charles-Camille Heidsieck.

In celebration of the spirit of the founder, the house has reconnected with the tradition, passion and spirit of the iconic cuvée. The new edition is the first release in 37 years and only the sixth release in the history of Champagne Charlie, following 1979, 1981, 1982, 1983 and 1985. American wine lovers will be the first to taste this legendary cuvée with celebrations starting in New York City, a city where Charles-Camille himself sold thousands of bottles in the 19th Century. The bottles journey will then continue across the globe where the UK celebrations will unfold upon its arrival on the 28th June.

A legendary man of inspiring vision
In releasing the new Champagne Charlie cuvée, the House is demonstrating a long-term, meaningful investment in the legacy of its Founder, as Managing Director, Stephen Leroux explains, “We are reconnecting with a tradition. By confirming our decision to make the ‘Charles spirit’ and Charlie’s passion the essence of the House, we are recreating our crown jewel. We will produce only a very limited quantity of bottles for the first issue of this new release, which is, in fact, a rebirth. It will be available only through a very select network of distributors.”

The great art of blending, rendered in champagne
In the late 1970s, then cellarmaster, Daniel Thibault worked alongside the Heidsieck family to create Champagne Charlie as a tribute to their ancestor. With a long experience shaping the Charles’ signature wine style, Thibault followed his instinct to undertake what would be one of the most resounding successes in his winemaking career – the creation of the five editions of Champagne Charlie – 1979, 1981, 1982, 1983 and 1985. 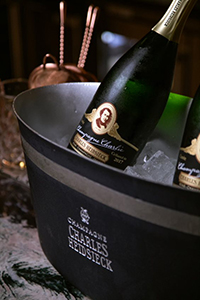 In blending the new Champagne Charlie, cellarmaster Cyril Brun interpreted the Founder’s spirit. “For this new edition of Charlie, I took my inspiration from previous editions, tasting each of the past releases to reconnect with the initial creation. My first impression was overwhelming; the freshness and aromatic intensity and silky, saline finish could be systematically found in all the wines, as if these qualities transcended the effect of vintage. It was the key.”

He continued, “This renaissance Charlie is a multi-vintage wine. The intentional use of reserve wines is also, for me, a symbol of a greater freedom of creation in this quest for the absolute.”

The new Champagne Charlie cuvée is comprised of nearly 80% reserve wines, with select components aged on lees for up to 25 years. A blend of 52% Chardonnay and 48% Pinot Noir, the assemblage also includes 20% wine from the 2016 vintage, cellared in 2017.

Who was Champagne Charlie?
Born June 17, 1822, Charles-Camille Heidsieck was a gentleman-entrepreneur with a taste for adventure. In 1852 at the tender age of 29 he became the first owner of a champagne House to visit the United States, making the journey four times over ten years.

vées, earning him legendary status across the Atlantic and the nickname, ‘Champagne Charlie.’

A Champagne heir driven by a spirit of conquest and taste for a challenge, CharlesCamille was very comfortable amongst the daring atmosphere of the 19th century. He was more than a celebrity or a persona: the extremely popular jazz song ‘Champagne Charlie,’ written by George Leybourne and released in 1858, made him a legend, bolstered more recently by several movies and fictionalised biographies.

The authenticity and principles of the man known to the Americans as ‘Champagne Charlie’ have inspired the unique quality of his champagnes, stored in two-thousand year-old Crayères, or chalk cellars. Five generations have since succeeded at the helm of the House, championing that early vision of an exceptional quality, unique champagne.

Where to find it
Champagne Charlie will be available from the 28th June 2022 at https://hedonism.co.uk & https://thefinestbubble.com, priced at £550.

As part of their ‘Champagne of the Month’ programme, The Ritz, London, will feature several Charles Heidsieck cuvées across the site during July and be the only place in the UK to exclusively serve Cuvée Champagne Charlie by the glass (£75).