The extensive range of PanelPCs available from BVM Limited has been augmented with two new models, designed for use in harsh environments. 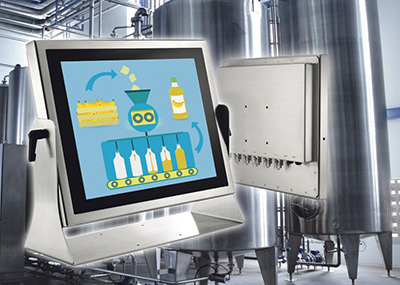 The robust anti-corrosion stainless steel units have resistive touch screens and fully sealed to IP66, enabling them to be used in areas such as food preparation where they can safely be washed down during routine cleaning. Similarly, the IP66 sealing means that they can also be used in aggressive environments where dust and dirt are frequently present.

All models feature M12 metal IP68 interface connectors and IP67 power and I/O connectors to preserve the integrity of the environmental sealing. Three units, based on Ivy Bridge i3/i5/i7 or Celeron processors, the HM65 chipset and HD 4000 graphics are designated the WTP-9A66 versions, with up to 16GB of 1,600 MHz DRAM available. The two lower power WTP-8B66 units are based on the Celeron J1900 quad core processors with up to 8GB of 1,333 MHz DRAM and are available in the 15 and 19 inch screen sizes.